Click here   for current schedule  &  registration deadlines.
Cadettes look for the ME in media and learn how they can shape media—for themselves, their community and the world.
Stories are told everywhere and in all kinds of formats – in movies by big Hollywood studios, online by bloggers and through social networks, through the clothes chosen by stylists for a fashion spread in a magazine, through the photos chosen by a newspaper editor. MEdia helps girls think about who is responsible for telling all the stories they see around them and how can use their story to help "re-make" the forms of media they see around them.   Completing a Cadette Journey is a prerequisite  for the Silver award. 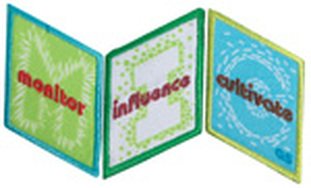 The final steps of the Awards are earned by completing a Take Action Project that will be completed after the workshop series. An essential component of a Take Action Project is that the girls take it out to the community. During  the workshops, the girls will choose & work on their project and make a detailed plans for how to reach out to the community. You can  pre-purchase awards from us for your convenience, but please hold on to the awards until the project is completed. The requirements will be explained in detail during the workshops.  For more information about Take Action Projects, check out the drop down menu under the TAKE ACTION PROJECTS tab above.

What happens on the Media journey ?  Here's a sneak peek

The Cadettes will look at the messages they see in print media & online.
​This video is a great info into that topic.  Listen to what Riley has to say about stereotypes in marketing

Pictures taken prior to Covid restrictions.

The Cadettes are challenged to find as many "hidden ads as they can find in their meeting place.  They were shocked to find well over 100.

One of the skills covered in the Media journey is taking a survey to identify journey issues. Click here to see a sample survey & real results.

Critical Thinking
How does the Media try to influence you ?

Reuse and upscale ads and express yourself artistically. Take an ad with a message you don't like & make it into something else !

We don't do the following crafts in our sessions, but we think they look fun !Shredded Magazine Bangle Bracelet Use a shredder to shred magazines. Glue each shred to a wooden bracelet. Finish with clear gloss

Filmmaking Skills
Movie Camera Moves and Moods. The adult guide has suggestions for the girls to expand their film making skills before starting their remake project.  They were hard for the girls to picture, so we made a short demo film starring our cats!.

MEdia REmake Take Action Projects
For the MEdia journey, he girls will identify some form of media that they think needs to change & they remake it.  Once they remake it, they advocate for it & share what they learned to educate and inspire their chosen target audience.

A battle between prescription drugs and home remedies, this video reveals the pros and cons of both sides, and while assuming that both may give the same results, we do consider home remedies to be a safer and more cost-effective option. See which side you are on and watch this take action project by GIrl Scout Cadettes  Click here to view

Tips from GSUSA on how to make an effective Public Service Announcement PSA
Here is the link to the page where you can find this video & more ideas.
http://forgirls.girlscouts.org/how-to-make-a-psa/#/girls5_9/volunteer-guides/how-to-make-a-psa

You may think that Girl Scouts using Media is a new thing.  Not so !!
Take a step back in time to 1918.  The Golden Eaglet, a feature film about Girl Scouting was shown in movie theatres !!
Part 1